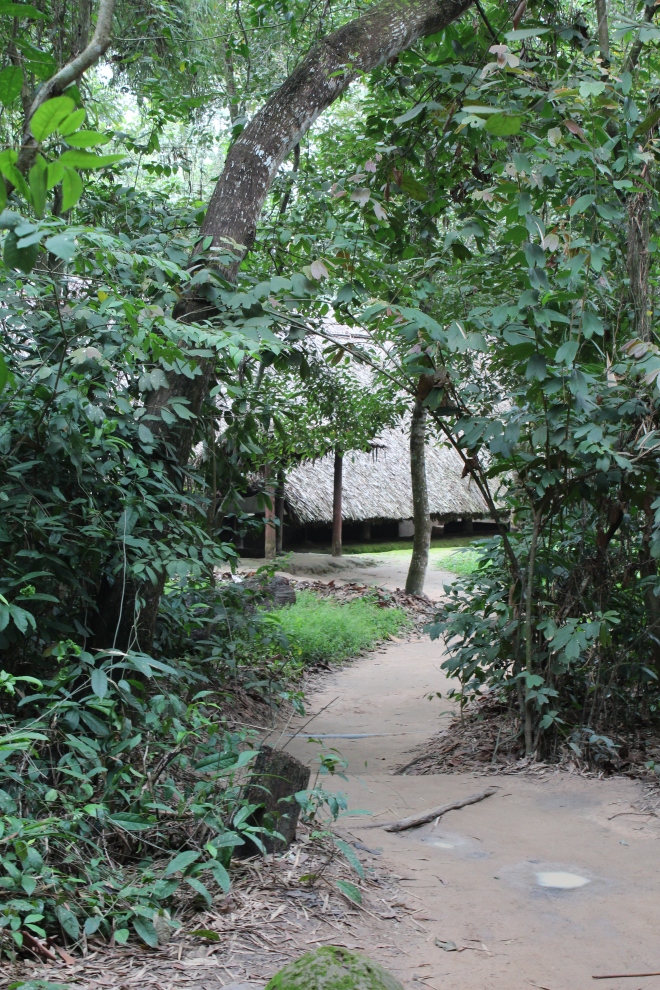 On our third day in HCMC we booked a tour with out hotel out to the Chu Chi Tunnels to get an idea of what it was like for the soldiers during the Vietnam war, from both the American and the Vietnamese perspectives. It was beyond powerful. They’ve definitely made it into a tourist spectacle but it’s still disturbing to see how the locals evaded invading soldiers. Word of caution, if you’re claustrophobic, go in first, not last. That way you don’t get stuck because once you go in, the only way out is forward. Moving on!

The beginning of the tour started out at a little factory where they make works of art out of resin and abalone shells. The shells are cracked into tiny pieces and then the artists piece them together to create beautiful mosaics. They’re then covered in resin and left to try in the sun. The process is repeated 3x until the wood is SOLID. The top layer of the resin is then slowly scuffed away with sandpaper to reveal the polished abalone shell and design. 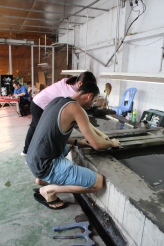 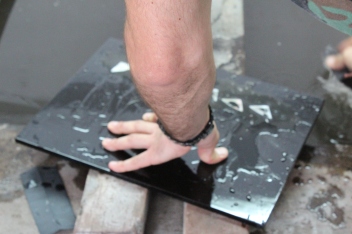 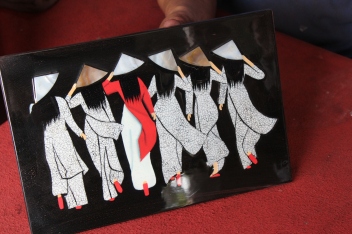 Of course, the point of the little pit stop was to get us tourists to purchase something. No one in our group fell for that but we did purchase some snacks and refreshments as it was about 90*F with about 90% humidity. Hot, to say the least. Once back in the car we continued down the road a ways to our destination. Once we arrived we were ushered on by our guide and told to stay together and not leave the group as there are still likely hidden traps and snares still hiding in the jungle. I’m sure that was mostly to set the mood for the rest of our treck, but a little intimidating nonetheless.

During the tour we got a chance to see the various guns that were used, different types of traps and snares, tunnels, how they lived and hid, and we even got to fire AK47s at the end of the tour. The top right photo above is the entrance to the tunnel that we were allowed to explore. The tunnels had been widened by nearly 3″ to let larger tourists through and even then, it was incredibly claustrophobic as you were pretty much walking like an ape the entire time, unable to ever stand. It was also even more hot & humid inside the tunnels than above ground which made it feel even more compact.

It was a powerful experience. Seeing the grounds gives you an idea of the terror that those people survived through and the destruction that took place, largely due to American bombings. They were truly highly resilient people and knew the land and how to make it work for them.

As we wrapped up our tour it began to rain, and I’m not just talking a quick drizzle, I’m talking a torrential downpour. The jungle became pitch black within minutes and we were scrambling to get back to the bus without ruining our cameras and other equipment. The ride home was nothing short of hair-raising as our driver zipped in between cars and bikers on a wet, slippery road. Thankfully we made it out with our lives.

All I want to do is go back to Scotland 🏴󠁧󠁢󠁳󠁣󠁴󠁿 #Scotland #unitedkingdom #corgarff #castles #hiddenscotland #explorescotland
Come on Santa, I’ve been a very good girl this year! 💁‍♀️✈️ #christmas2019 #travel #wanderlust #planeticket
Happy St. Andrews Day to all my Scots out there! #standrews #scotland #standrewscathedral #standrewsday #hiddenscotland #scotlandtravel
Thankful for you and our amazing adventures 😘 #thanksgiving2019
At my office daydreaming about strolling through Scotland 🏴󠁧󠁢󠁳󠁣󠁴󠁿 and drinking a pint in a pub. Brb while I book a flight back to Edinburgh 🏰 #scotland #unitedkingdom #travel #explore #wanderlust
I lived in AZ for nearly 20 years and never saw the Grand Canyon; I got to check it off my bucket list this weekend 🌄📸 #grandcanyonnationalpark #arizona
A layover in Paris is never a bad thing, especially when you get a hotel right next to the Eiffel Tower! Crazy Horse cabaret was such a fun, sexy, artistic show (complementary champagne wasn’t bad either!) and of course @_josephmichael_ had us eating Italian food in Paris, and it was delicious nonetheless! #paris #france #eiffeltower #crazyhorseparis #cabaret
Took a little detour off our route to check out Roslin Chapel and found ourselves hiking to find (one of) Wallace’s Caves. There was a metal plaque embedded in stone with the sur name (Farquhar) carved into it as well as a hand holding a dagger with “Fortiter” (meaning Boldly) carved into it. This was the clan motto and symbol for the MacAlister and thought to be carved during the Falkirk battle ⚔️ #scotland #falkirk #edinburgh #unitedkingdom #travelbug #wanderlust
So much history so well preserved 😍 Stirling Castle was one of my favorites of the non-ruined castles that we saw. The town of Stirling was incredible and I could have moved there in a heartbeat 💗 #stirlingcastle #stirling #scotland #unitedkingdom #hiddenscotland #scotlandexplore #scotlandroadtrip
%d bloggers like this: