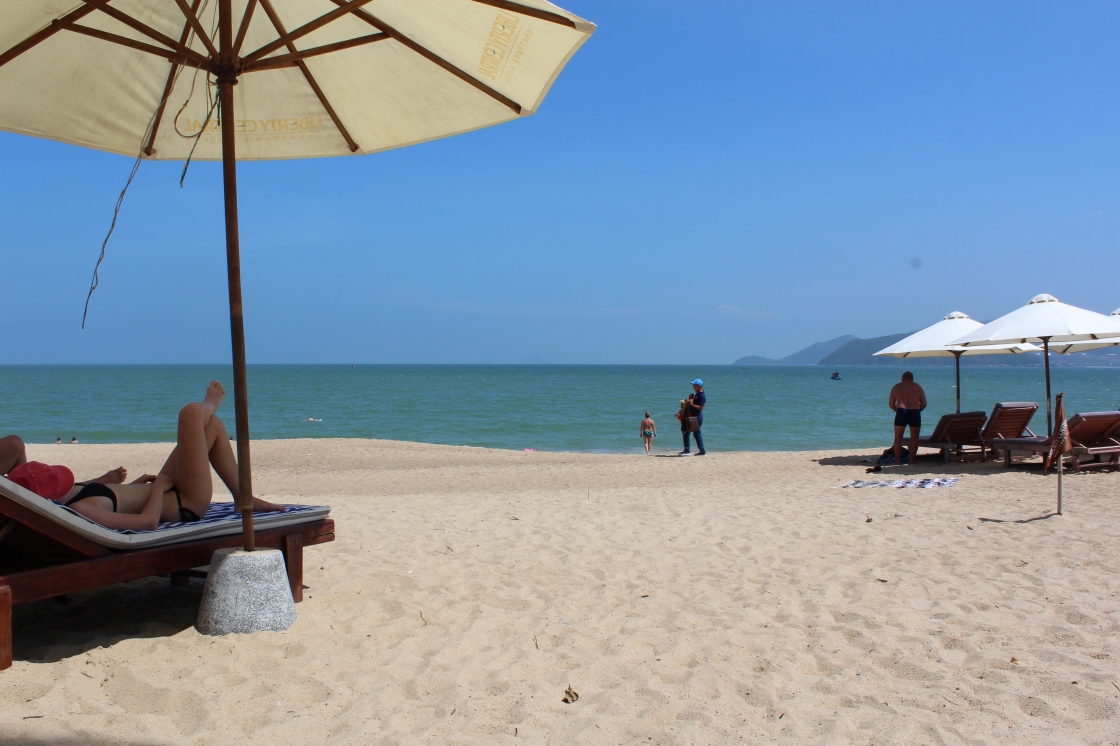 After our adventures in HCMC we made our way north to Nha Trang, the laid-back beachy part of Vietnam. Being San Diego locals, we always like to throw in tropical beachy spot somewhere along our treck, if possible. Nha Trang was the perfect destination for this. The first day there was spent relaxing on the beach, soaking up the sun, eating and drinking local food & beverages, and in true tourist fashion, having bracelets made on the beach.

After a few hours (and a few beers) we meandered down the boardwalk a little bit until we hit a restaurant with a tasty looking menu and we ordered a small feast of sushi, and of course, a pizza for my boyfriend. At this point, the couple that we were with started to get a little panicked about their funds and decided to not join us for dinner. This was just the beginning of a chain of occurrences with them but that’s a story for later.

The next couple of days in Nha Trang were spent visiting some of the local sites and attractions. First on our list was Po Nagar Temples and in order to get there we had to rent some motorbikes; a first for our companions.

The temples of Po Nagar were beautiful and positioned along a cliff face creating for a rather dramatic setting for photos. Unfortunately, there were a TON of young adults dressed to the nine, as if for some prom, completely taking up any space to get a good shot of the temple from that angle. There were a lot of people there too so getting great shots was a little difficult. From there we hopped back on our motorbikes and scooted off to Long Son Pagoda, famous for it’s giant white buddha.

Long Son Pagoda, also known as Chua Long Son, is situated on the foothill of Trai Thuy Mountain. Originally built in 1886 in the style of Taoist architecture the temple has been the home to many high ranking buddhist monks. The temple can be seen from anywhere in the city and offers impressive views from it’s peak. The 24-meter tall white buddha and laying buddha inside it pay tribute to the brave monks and nuns that died in the late 1950s protesting against the corrupt, US-backed Diem regime. Good one America, good one…

After touring the temple grounds, snapping some photos, and enjoying the views, we ventured to our next site, Hon Chong Beach to see the “giants fist” and grab some lunch. When we arrived, there was a group putting on a musical display of traditional Vietnamese instruments and it was nothing short of impressive.

After exploring around Nha Trang by motorbike we returned to our hotel to shower off and relax before going out for the night to SkyLight Skydeck and Rooftop Beach club. We had made reservations a few months early in order to get a bottle service table and dinner brought to us while there. Unfortunately, when we arrived, they claimed that we didn’t have a reservation and that we wouldn’t be able to have dinner. Very upset, we ventured back towards our hotel and ended up getting some pretty damn tasty sushi at Kiwami, which ended up saving the night. The next morning we packed up our things and headed off to our next stop, Hoi An Ancient town.