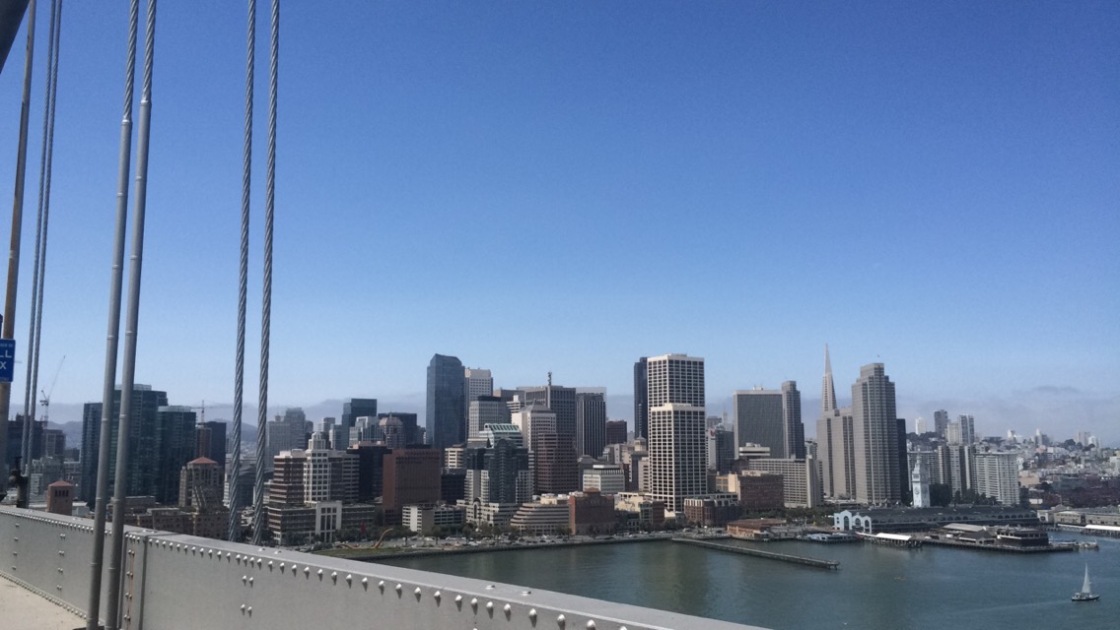 San Francisco is a city unlike any that I’ve been in before. Population-wise, the city is quite large but geographically the city is a mere 7×7 miles. That being said, there are many different cultural influences all trying to stake their claim within the tiny perimeter of the city which has made for rather segregated, but highly cultural neighborhoods.

The first part of town that we ventured into is known as the “Tenderloin” or “TL”. Unknowingly to us, this area of town happens to be the roughest part of town in all of San Fran and has been featured on hit T.V. shows such as Ganglands, which has highlighted the chaos that takes place within this sketchy part of town. When booking a hostel for us (every hotel was well over $150 a night) I was simply looking for a decent, clean, cheap place for us to sleep for 5 days. The youth hostel in the tenderloin came up in my searches and had reviews from other travelers that suggest that the place would be perfect for our needs. When we checked into the hostel upon our arrival into San Francisco, I felt like I needed a hazmat suit just to be in the room. Ignoring how dirty the room was, we dropped off our bags and were making our way outside back to our car when the car parked directly outside the hostel had the window smashed in during broad daylight. Needless to say, we checked out and got our money back and ended up crashing on a friends house that was also going to Outside Lands Music Festival.

Considering that I had never been to the city before, my man and I made it a point to drive around and see as many sites as we could within the time that we were there. The first SF landmark that we saw was Lombard St. I feel like this is the street that people think of when they think San Francisco. With its steep winding road and colorful victorian townhouses all in a row. It’s definitely a beautiful site but completely over-running with tourists at all times of the year.

After making our way down Lombard St, we decided that we were hungry so my boyfriend and I went to Bistro Boudin on the north side of town in an area called the Fisherman’s Warf for lunch to see the “bread” museum and to be able to say the we’ve eaten at the Original Boudin. Before we even reached the front doors we were hit with the smell of freshly baked bread. The distinct smell of sourdough tickling our noses and guiding us up the stairs to the restaurant. Unfortunately, and except for the bread, the food wasn’t very good, the service was poor, and everything was overpriced; except for the beers, but those ended up taking too long anyways.

Still making the best of our first few hours in San Fran, we made our way over to Ghirardelli Square to visit the factory and pick up some decadent chocolates. Little did we know that you get free samples at nearly every door, whether you want them or not. We ended up walking out with about 3lbs of chocolate, two double cappuccinos, and a lurking stomach-ache. It was worth it.

After leaving Ghirardelli Square, I insisted that we go see The Painted Ladies. They may be the most iconic image I have when I think of San Francisco, thanks to Full House. They are beautiful homes and perhaps one of the most photographed rows of homes in the world.

The rest of our exploring didn’t take place until after Outside Lands and then again we only had one day to recover from the three days at the festival and finish any site seeing that we wanted to do. The first thing that I wanted to see was Golden Gate Bridge. We hopped in the car and made the drive over the bridge to the lookout point on the north side of the bay. It was cold out and that famous San Fran Fog was looming low over the city so it was difficult to even see the bridge once we were off it.

Finally, the last iconic location that we visited in San Fran was the hippie district of Haight and Ashbury. This area featured a bunch of cute little shops and markets that seemed to be comprised mostly of locals even though its a rather famous area to non-locals. We stopped long enough to look around in some of the shops and grab a pizza before making our way to the hotel that we booked for our last night in SF so we could get out of our hosts hair and have some time to ourselves.

All-in-all, San Francisco is absolutely beautiful and I would definitely go back for a return visit, even though the prices are incredibly high for nearly everything. Not to mention the traffic to go a mere seven miles can cost you over an hour. Other than those downfalls, San Fran is stunning and features so many eclectic neighborhoods and hidden gems just waiting to be discovered by locals and tourists alike.

Coming up… my experience at Outside Lands. Happy Blogging!