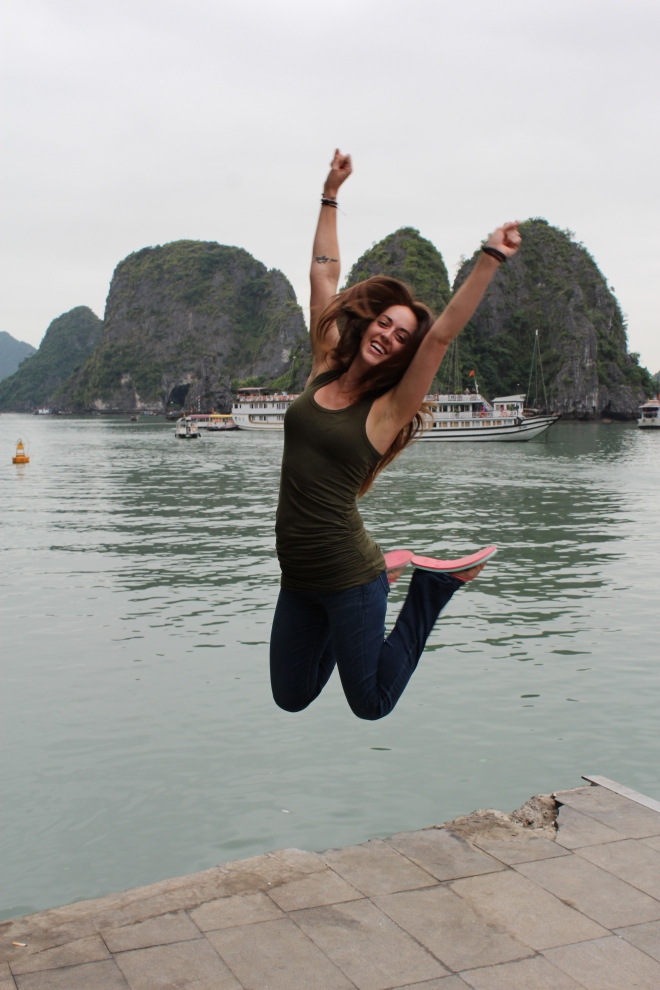 FINALLY! The part of our journey that we’d been dying for from the start: Ha Long Bay. Ha Long Bay is known around the world as a UNESCO World Heritage Site and it’s comprised of about 1,600 islands and islets forming a jaw-dropping landscape of limestone pillars floating on the gulf’s surface.

We opted for a rather luxurious tour package that included a guide & driver, tour van, tour boat, 5 course meal, drinks, and a couple stops along the tour. It was a bit expensive ($80US per person) but definitely the way to go. There was also a staff onboard that catered to us the entire time, which was wonderful. They fed us a feast of egg drop soup, cucumbers, egg rolls, peel & eat shrimp, and fruit for dessert. It was delicious and the perfect food to go along with out adventure.

The limestone rocks atop the green water and a slight mist in the air made for a hauntingly beautiful scene, and water erosion around the base of the islets made them appear to float on the water’s surface. One of the first stops along our journey was at Hang Sung Sot, an absolutely massive cave system also known as the Cave of Surprises. We docked, debarked, and made our way up a flight of stairs in order to enter the cavern. Inside they had various colored lights scattered around the cavern which made for a rather dramatic scene. There were beautiful pools of water, stalactites, stalagmites, bats flying overhead, and beams of light poking through the cavern entrance. The cave is famous for some of its formations that resemble figures like a buddha, a sea turtle, and a penis. Yes, you read that right, a penis. At it’s lit up by a pink light. You can’t miss it 😉

After clambering through the caverns and snapping some pictures of the bay from the top, near the exit, we made our way back to are boat. After a short ride to a different part of the archipelago, we explored a small bay only accessible by riding a small boat through a cavern. The cove had fallen victim to tourists in the late 70s and 80s and there were graffiti tagging on some of the walls of the cove which definitely took away from the mystique of the place, but the monkeys climbing the cliffs and jumping about the trees were cute and very friendly as tourists offered chips and other snacks to the monkeys. P.S. DO NOT FEED WILDLIFE, ANYWHERE!

Sailing around the coves of Ha Long Bay was a great experience, especially doing it cruise style as we did. We got to try local foods, learn about the history and significance that Ha Long Bay has played on the Vietnamese culture, explore some amazing sites that we definitely wouldn’t have seen without our guide, and of course, some perfectly picturesque photo opportunities. Everything was well worth the cost of the tour, and I recommend this option if you’re considering a tour of Ha Long Bay yourself.

This was our last stop along our tour of Vietnam, the next morning, we were off and on our way to the airport to fly back to LAX in the states. This trip taught me so much about my own country and made me appreciate the conveniences that we have in everyday life. It was interesting to observe the effects of a communist government on its people, and how the American-Vietnam war still plays a major role in their society. The devastation that was created can still be felt and it’s important that, that feeling doesn’t fade, so history doesn’t repeat itself again.