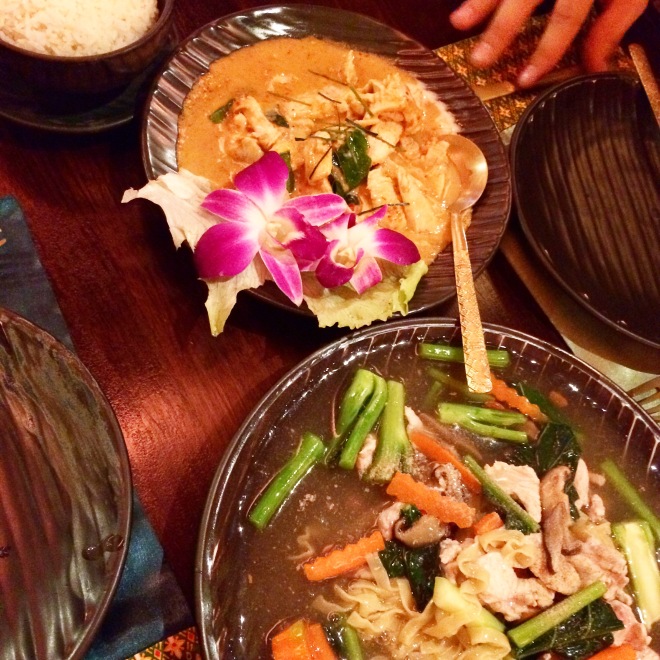 Bangkok is a miraculous city, and it was so much larger than I had imagined it. I’m a huge fan of Travel Channel and I’ve watched the Anthony Bourdain and Andrew Zimmern episodes on Thailand and Cambodia but nothing can prepare you for what a new culture is going to be like until you actually visit for yourself. The second we stepped into the air from Bangkok International Airport (BKK) I knew I was in a foreign country. The smell was unique, not bad by any means, just different. It was thick with lush dense air but not necessarily any more humid than I’m used to at home and there was a faint smell of cooking food coming from all directions.

When we first got a taxi from the airport we were charged an overly excessive 1400 Baht to drive barely 30 minutes from the airport to Sukhumvit, an area of Bangkok where we were staying. Unfortunately, we didn’t find out until the next morning that you should never pay more than 500 Baht to go anywhere in Bangkok whether it’s a taxi or tuktuk, but most tuktuks won’t go long distances. After the 30 minute drive to our hotel (Smart Suites Hotel*), the cab driver was having difficulty finding it and we spent another 20 minutes or so asking people on the streets for directions to our hotel. When we finally arrived at the hotel it was just before midnight which left us plenty of time to drop our bags in our room, freshen up a bit, and hit the bars down the street for some beers to unwind after the flights. Finding our way back to the hotel for the night, we tucked in and fell asleep on Thailand Time which made it so we had virtually no jet lag what-so-ever.

The next morning was a treat. It was incredible to wake up, open the blinds of our hotel room, and look out onto the already bustling streets below. Within the hour we were ready to go explore and we began walking the streets of Sukhumvit, which is laid out like a big grid so it’s easy to navigate. The first food stall that we saw with a line (because a line always means that the food is good) we stopped to see what they had to offer. Fried fish balls in a sweet and spicy sauce was the specialty of the house and we couldn’t help ourselves; the smell alone was mouthwatering. The balls weren’t actually fishy at all and tasted more of poultry. The crust was a light and pillowy and had already begun to absorb the flavors from the chili sauce before we could get our first bites in. Needless to say, my first taste of Thai street food didn’t disappoint.

After we had filled our bellies with delicious street food, we found a tuktuk that was willing to take us to the Grand Palace in the heart of Bangkok for 500 Baht. I could write a whole post alone on how insane the tuktuks are, but to spare you the lengthy post, I’m going to sum it up by saying that I felt like I was going to die nearly every second that I was on those tuktuks, even when we weren’t moving. Terrifying, but oh so exhilarating. The Grand Palace was beautiful, massive, and absolutely swarming with people. We managed to snap a few shots of the palace and then decided to make our way across the street to a large community park. We strolled around the park for awhile, played with the Go Pro we brought, and then headed to The Standing Buddha Temple about 15 minutes away from The Grand Palace. The statue was beautiful, and being plated in gold, it shone from a distance which made us even more excited to visit (see image at top of post). After touring the Grand Palace, The Standing Buddha, and the surrounding areas we headed back to our hotel for the night.

Back at the hotel, we ventured into Sukhumvit to see what we could find. After walking a few blocks we realized how hungry we were and stepped into a restaurant called Chilli Culture where we had our first sit-down experience with Thai food (featured image). The curry was outstanding and the Pad See Ew was delicious to match. The best part of the entire meal? An appetizer, two entrees, sides, and 4 large bottled beers cost us a grand total of $33. We were in heaven. Welcome to Bangkok baby!

Stay tuned for more posts following my adventures in Thailand and Cambodia in my “Thailand Series”. Happy blogging :]